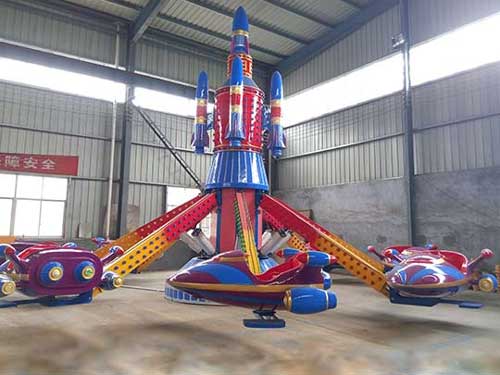 The self-controlled plane rides for sale In Philippines, also called self-control aircraft rides. It belongs to a very classic amusement equipment that is popular used in the amusement park, funfairs. It consists of mechanical, pneumatic, hydraulic and electrical systems. Planning to install a new self-control plane ride in your park? Contact us for details!

The appearance of this plane rides is rocket-shaped. It is a ride that rotates around the central axis and can lift vertically. The fuselage has 10 cockpits and suspended by ten mechanical arms. Each cockpit can take two people. A total of 20 people can be used. Of course, if the customer has requirements for the number of cockpits, they can also be customized. The appearance can also be customized according to customer’s needs.

The 10-arm automatic control aircraft is composed of complex mechanical structure. The shelf is supported by special steel frame. The appearance is made by special process of FRP. The outermost paint surface is sprayed with special techniques. It has a good environmental protection effect. It can be faded for a long time, and there are colorful and beautiful lights and beautiful music on the outside. The ride is very good, and it can reflect its characteristics at night. It is very popular among passengers.

Application of Our Self-control Plane Rides

As a classic and popular kiddie amusement rides, the self-controlled plane is suitable for all kinds of large playgrounds, squares, amusement parks and other venues in Philippines. If you are planning to build a new park in Philippines, you can come to our factory for choosing some rides. So which types of plane rides you need? Talk with Beston Team directly now!